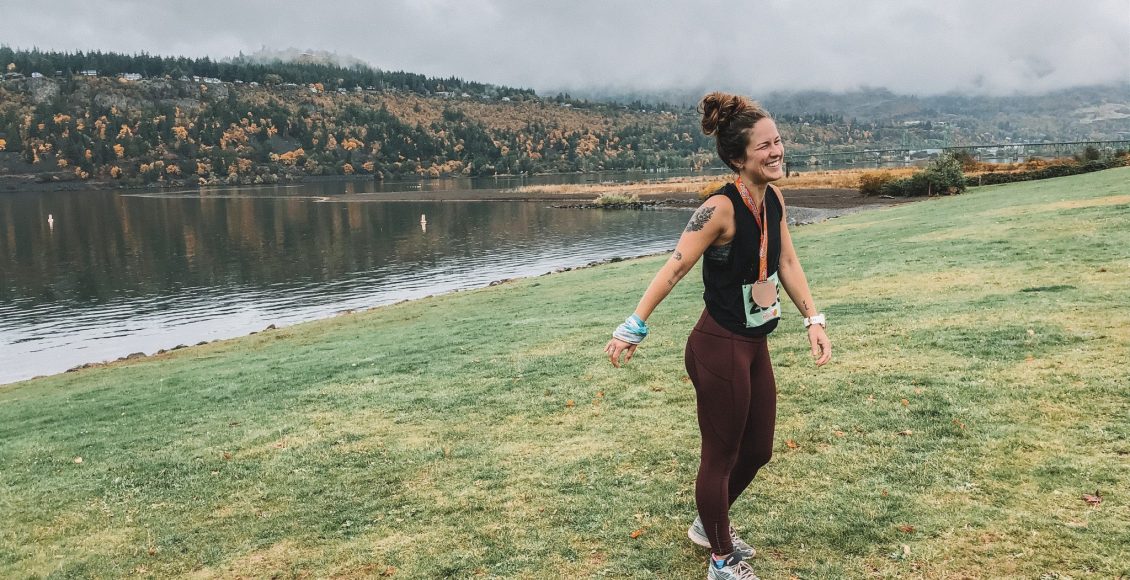 Whoa where do I even begin with this experience?!

First of all, this marathon was extra special for me because it was the first full that I’ve done after my ankle injury in 2018.  During the training for this race is when I feel like I fully fell back in love with running, and it was better than ever before.

Injury taught me to love my body for every little thing it does for me, and to never take it for granted.  Most of my training for this race took place on my favorite mountain trails in Alaska, with some of my very best friends running next to me.  The entire process was a huge soul filler, and I’m so happy that I feel lit up by running again. I also convinced one of those running besties to do the race with me-her first full marathon!!  It was a big deal and made the day 100 times better. There’s nothing better than sharing these things with friends that are just as psycho as you are. 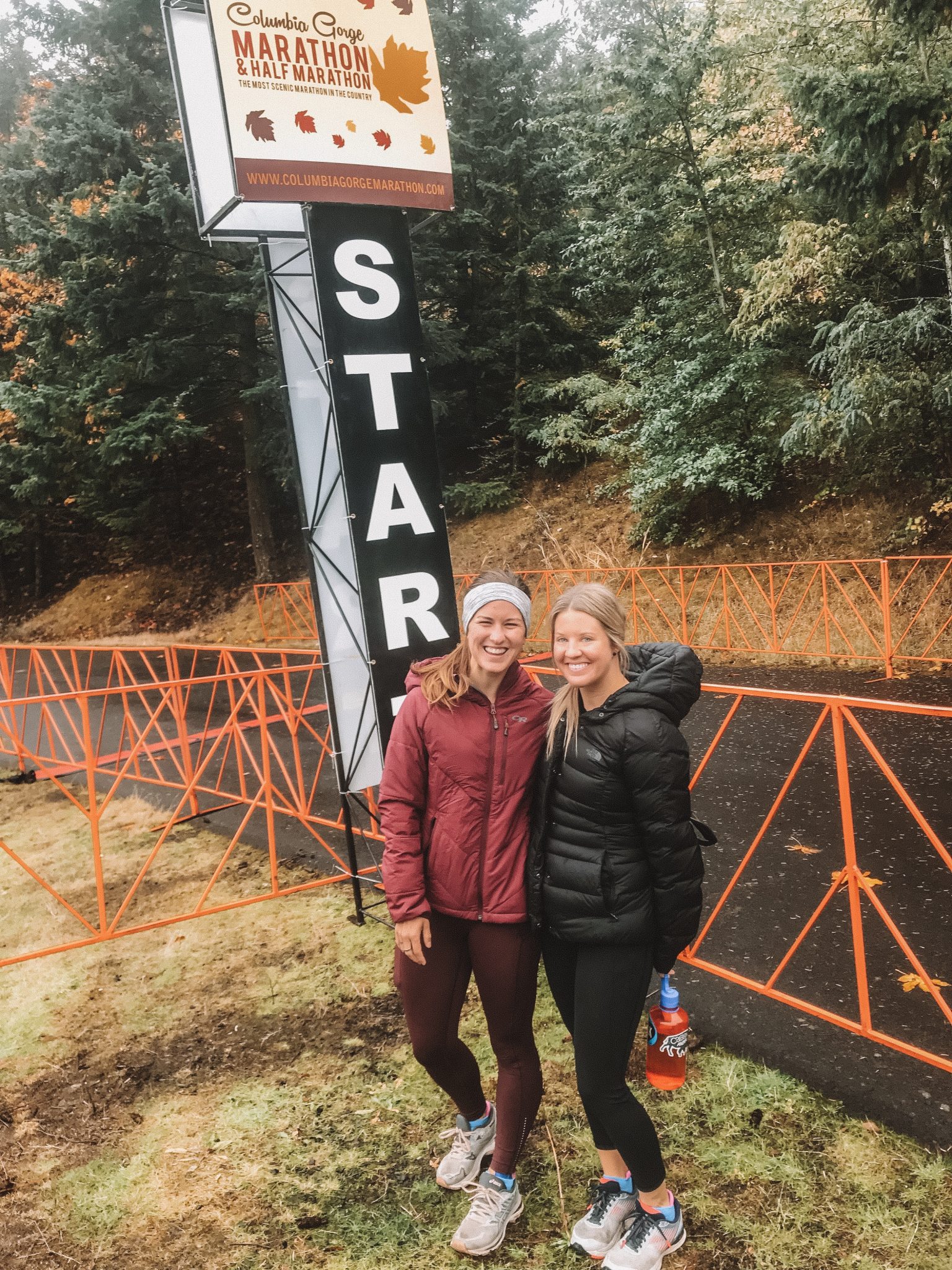 The race took place in Hood River Oregon, aka a little slice of magic.  I am obsessed with Oregon in general, and Hood River lived up to the expectations.  It’s the cutest little town with no shortage of outdoor adventure and local feels. And the race course!  Wow. When I wasn’t busy dying, I was drooling over the scenery we were running by. As you may have guessed, it takes place along the Columbia River Gorge.  Seriously, it was stunning. It was a very hilly course (to our surprise oops, because honestly I never look at the map running!) with a vert gain of almost 2,000 ft, which is actually pretty decent for a street race.  Don’t let that scare you though, for all the uphills there are plenty of downs to make up for it!

This race is on the smaller side, but there was still a good amount of sideline cheer support.  The course is also an out and back, meaning you turn around halfway through to do the whole thing again.  I usually don’t prefer this style race, but actually didn’t mind it here! It was so beautiful and definitely had more of a trail race feel to it at times. 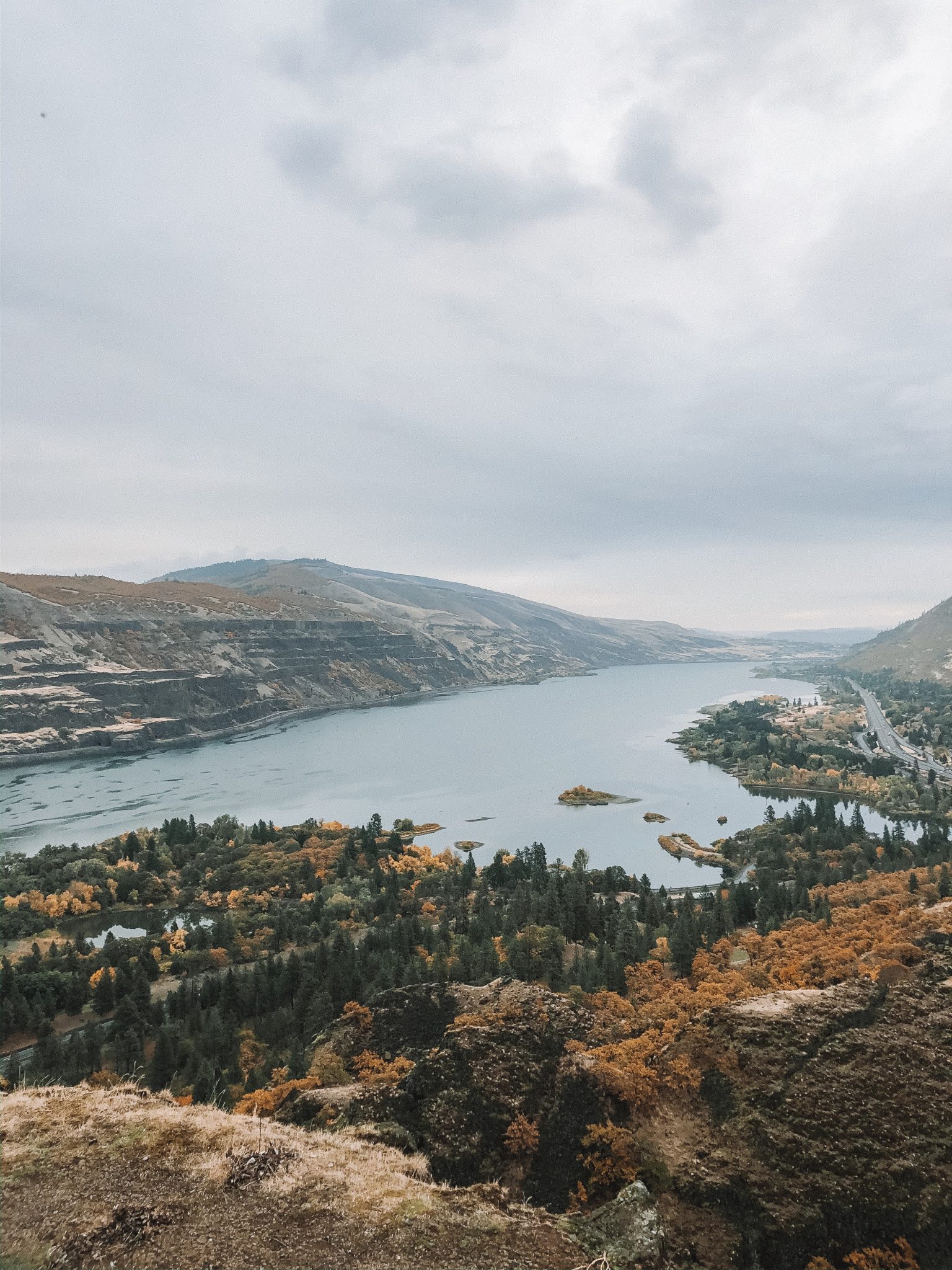 It was extremely well organized, and plenty of aid stations along the way.  The post race party didn’t disappoint either, with beer/kombucha on tap for runners and a whole buffet of delicious  tacos. There was also randomly a basket of fresh strawberries at every table and for some reason they tasted like the nectar of the gods post race.  The medal was also way cutie!! 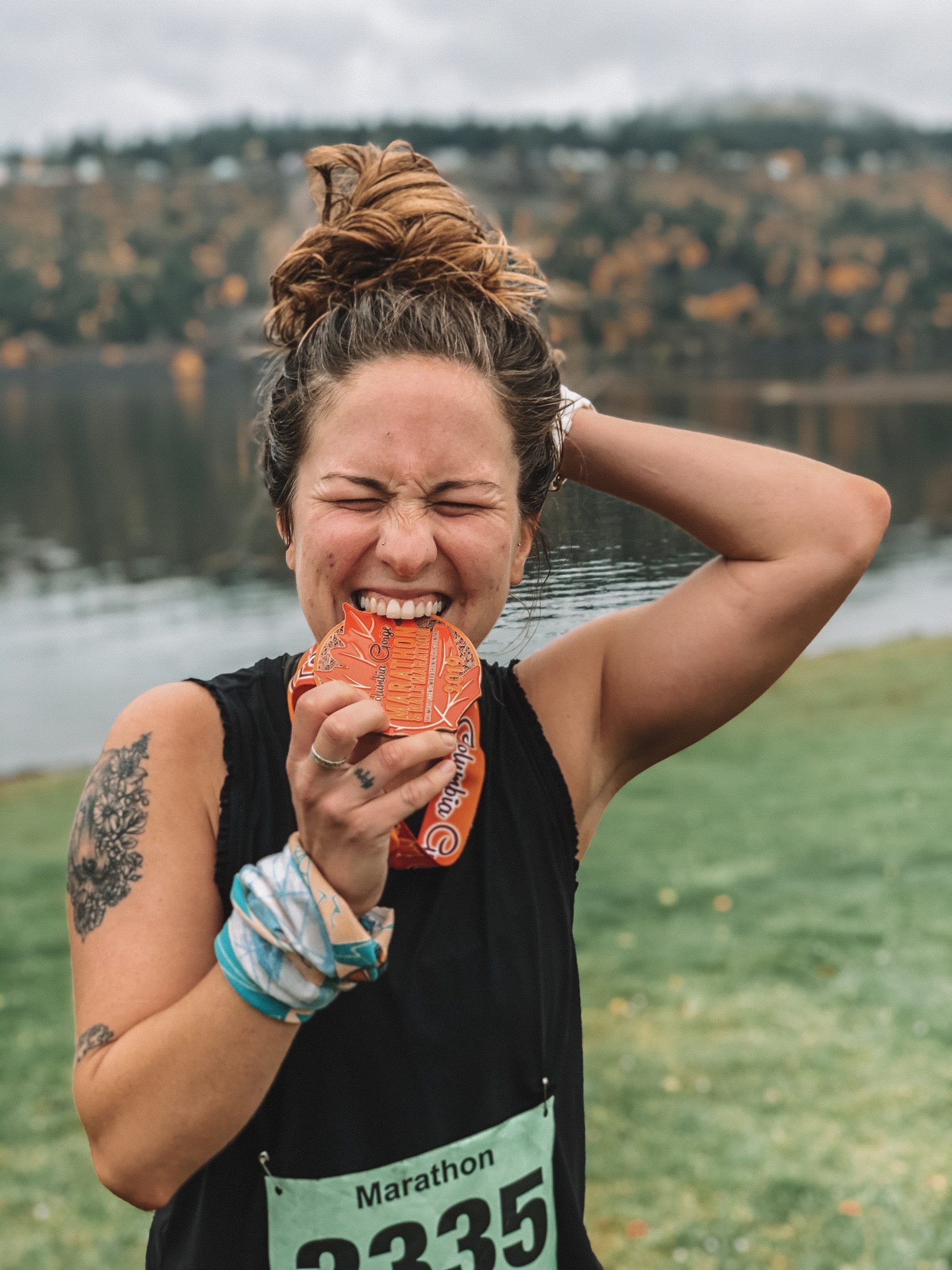 The magic of Hood River allowed me to PR by 17 minutes, and beat my goal by 10 minutes.  Although it didn’t come easy, and it was actually the worst I’ve ever felt post race. For the first 19 miles, Ky and I felt like we were flying.  With some miles in the 7 min range, we had truly grasped that invincible feeling that every runner hopes for mid race. Surely we’re ready for the Olympic trials.  Or at the very least to sprint for another 100 miles. You know, that runners high. But somewhere in between mile 19 and 20, that superhero feeling disapearred for me and was replaced with nausea, dizziness, ankle pain, and the worst whole body cramping that I’ve ever felt.   I hit the dreaded “wall” that you hear about. Which honestly is an accurate description, because the pain is comparable to running straight into a brick wall at full speed. So fun, right. I told Kylee, who luckily felt as fresh as a Spring chick, to keep running and gave her full permission to leave me there to die.  I kept moving my legs while simultaneously trying to see if my body was telling me it needed to throw up, faint, or both. Have I convinced you to run a marathon yet? If someone came by and rolled me off the cliff and into the river, I probs would’ve thanked them. But, like all difficult things in life, you put one foot in front of the other and keep going.

This is my favorite aspect of the specific distance that is the marathon-you truly live a whole life in those 26.2 miles.  You feel super high at times and lower than low at other times, and you can prepare all you want but sometimes the race just requires a little more grit.  As cheesy as this sounds, it’s a real metaphor to life.

I have a couple theories as to why I crashed so hard at the end, and learned for next race that I need to fuel better and not make a rookie mistake of running in old shoes.  As terrible as those last 6 miles were, the finish was that much sweeter because of the fight. And I still was super happy with my time! As disgusting as it sounds, Kylee and I were literally researching future marathons to sign up for less than 24 hours later.  Distance running will do that to ya. The love is crazy but real big. 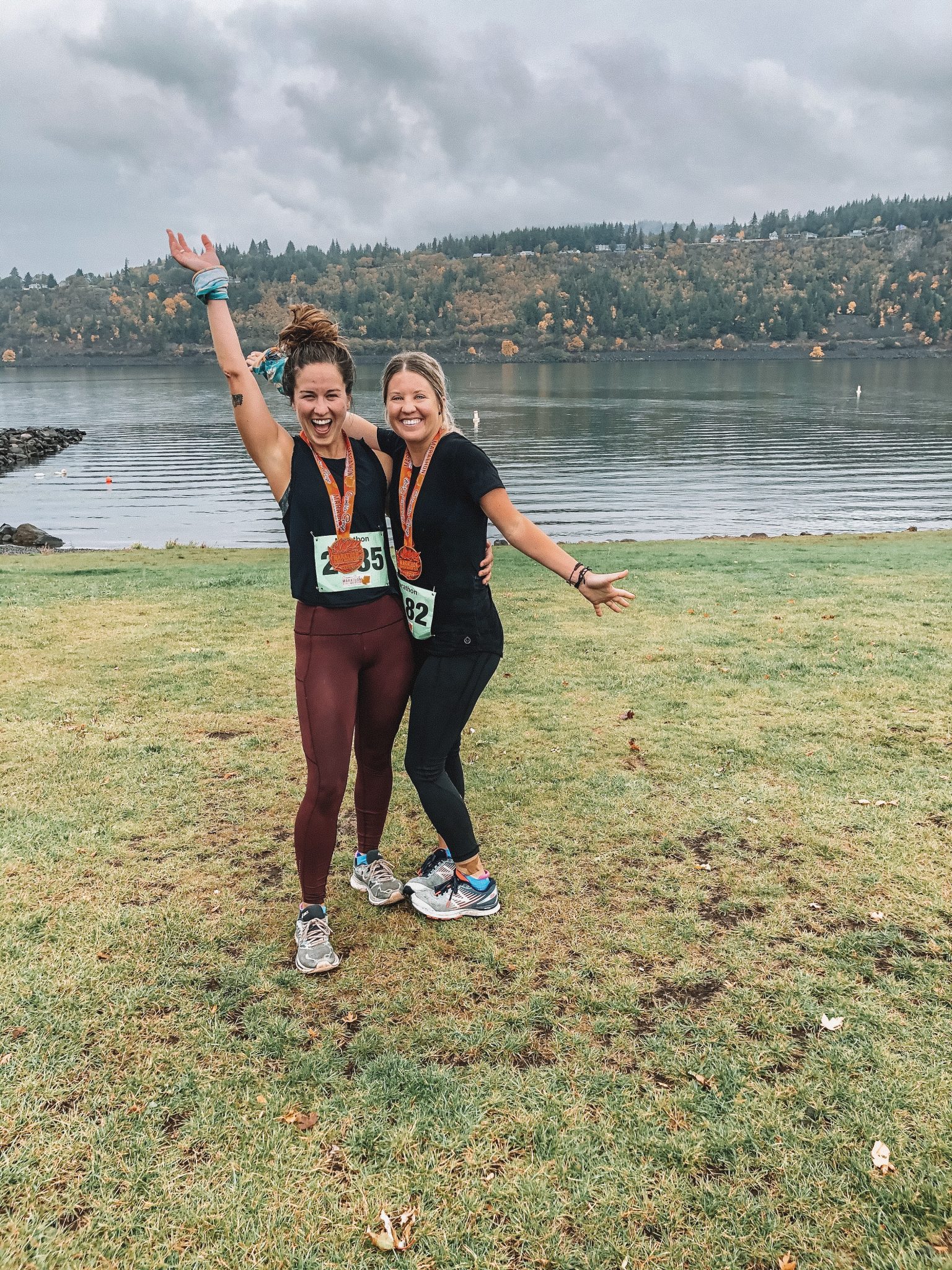 Overall, I can’t recommend this race enough.  It was well organized, stunning, and had a really great local feel that you just don’t get in huge races.  And if you’re considering running your first full marathon, maybe read the part about me crashing again.

Just kidding, it’s honestly the greatest experience!  You are SO capable, and stronger than you think. And I’m telling you it takes more mental strength than physical, which luckily, you can also train.  It will leave you with an appreciation for your body and confidence that nothing else can.